SUBMIT YOUR OWN EVENT! 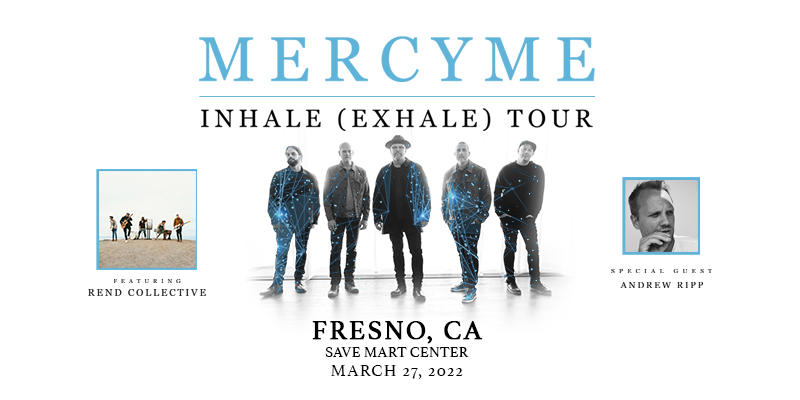 It continues to be a landmark time for the multi-platinum selling, GRAMMY® nominated, multiple American Music Award, Billboard Music Award and Dove Award winners MercyMe. They were named Billboard’s Top Christian Artist of the 2010 decade, and in 2020 received their eighth American Music Award nomination. A major motion picture based on the life of frontman Bart Millard who wrote the mega-hit song “I Can Only Imagine” after the loss of his father, opened at a remarkable No. 3 at the box office on Mar. 16, 2018 (Lionsgate, Roadside Attractions). In conjunction with the movie release, Millard penned a memoir and the band released a collection of hits titled I Can Only Imagine – The Very Best Of MercyMe. In 2018 MercyMe was named Top Christian Artist at the Billboard Music Awards, was the top winner at the fan-fueled K-LOVE Fan Awards including a win for Artist of the Year, and was the GMA Dove Award Winner for Artist Of The Year. Since their debut in 2001, the band has sold more than 9 million units in CD, single and DVD sales, garnered more than 48 No. 1 multi-format radio singles, and had four consecutive mainstream radio hits. MercyMe made history in 2014 as “I Can Only Imagine” surpassed 2 million digital downloads, making it the first song in Christian music to go platinum and double-platinum in the digital domain. The song has now gone has gone 4x platinum. In 2009, Billboard named MercyMe’s “Word Of God Speak” the No. 1 Song of The Decade and the group the No. 1 Artist of the Decade in both the Christian Songs and Christian AC Songs categories, recognizing them as one of the industry’s most notable talents. They have sold out venues throughout the US and Canada, including Radio City Music Hall, Red Rocks Amphitheatre, and have appeared on the Macy’s Thanksgiving Day Parade, Good Morning America, GMA3, The Today Show, CBS This Morning, FOX New Channel’s FOX & Friends, CNN, ABC News and in the pages of Entertainment Weekly, The New York Times, USA Today and more. Their tenth album, inhale(exhale), is available now.

IMPORTANT INFORMATION: We will be following the local COVID host guidelines at the time of the event. Please consider that there is an inherent risk of exposure to COVID-19 or other infectious diseases in any place where people are present. Although we have implemented recommended practices to promote the health and safety for all of our attendees and event staff, we cannot ensure or be held liable that the premises are free from contagions. By voluntarily entering and being present at this event, you (and each person in your party) acknowledge and agree to accept complete and sole responsibility for the inherent risk of possible exposure. As official local health guidelines evolve regarding COVID-19 safety protocols, the venue may shift seating configurations and/or increase capacity.

To stay informed on Save Mart Center guidelines: https://savemartcenter.com/about/coronavirus-covid-19-update/

One Comment on “MercyMe Live in Fresno with Rend Collective & Andrew Ripp!”